Once Upon a Time there was a Grimm...

Now matter how old you are, you're never too old for fairy tales.  Re-writes of fairy tales as novels, modern twists on classic favorites, live action movies... fairy tales never lose their wonder or appeal.  And this fall, fairy tale lovers, you are in luck, because on TV there is not just one but two fairy tale inspired shows for you to enjoy.

Crime shows are probably one of the most popular genera of tv shows out there.  Grimm feeds into that genre, but Nick Burkhardt isn't your ordinary cop and, as the show's tagline reads, these villains aren't your ordinary suspects.

NBC's new television drama Grimm taps into both the crime and the fairy tale worlds.  Nick, the main character, discovers when his elderly aunt comes to visit, that he is the last of the Grimms. The Grimms are, it turns out, hunters.  Hunters of supernatural creatures who threaten the world.  The fairy tales written by the Brothers Grimm aren't just innocent tales to entertain listeners, they are veiled warnings about the monsters that are out there.

Each episode parallels a different tale - such as "Little Red Riding Hood" and "Goldilocks and the Three Bears".  Living up to their name and the threatening premise, these modern adaptions are anything but innocent fairy tales.  It is part crime show, and with that does come some very intense scenes and a bit of violence and blood.

The main cast is done very well, and you get the feel of Nick's struggle as he tries to deal with and uphold his family legacy, while keeping it from his best friend and partner Hank and his girlfriend Juliette.  Nick isn't totally alone in his adventures, when things with supernatural creatures get a little tense, Nick calls up his reluctant sidekick Eddie - a reformed "big bad wolf" - who not only adds insight into the supernatural, but some pretty hilarious moments to lighten the mood as well.

Overall, while younger viewers may use caution when deciding whether or not to watch, older fans of fairy tales and cop stories will enjoy the suspense and action that is Grimm. 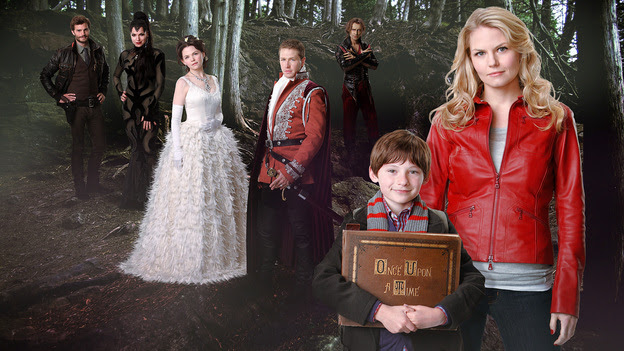 I'm new to the world of television shows, and while I've discovered many entertaining and very enjoyable shows this fall, the crown jewel of them all is Once Upon a Time.

There is nothing to dislike about this show.  The characters are amazingly well developed and each has an intriguing back story that is told through flashbacks throughout the episodes.  Each person, even the most minor of characters, is well developed and completely believable.  The costumes are gorgeous and very well designed (with the possible exception of the Queen's guard...).  The plot lines of each episode are engrossing and leave your jaw hanging at the end, each time, without fail.  The soundtrack is fantastic as well, and really adds to the drama.

Having a 10 year old boy as a main character and the very close connections to the fairy-tales keeps this show clean and one that can be appreciated by younger viewers as well.  So if you love fairy tales and you love good stories and characters, do yourself a favor and begin with Once Upon a Time.
Recorded by Amanda at 10:45 PM No comments:

Email ThisBlogThis!Share to TwitterShare to FacebookShare to Pinterest
Labels: television

One hundred and fifty years ago today, in 1861, classes began for the first time at North Central College, then known as Plainfield College.  The initial student population was a grand total of 40.

In 1864, the college's name was changed to North-Western and remained so until it was changed again to North Central College. (Allegedly, this was because even way back in the day, our football team was awesome, the other North Western had a lousy team, and the Chicago papers kept attributing our victories to them.  We weren't too happy with that and changed our name.)

Now, it's 11-11-2011, we're still North Central College and celebrating 150 years of awesomeness.  This afternoon, we'll have a convocation honoring our heritage as a liberal arts college, this evening, sixty-five years after the ban on dancing was lifted by a group of students who became the student organization now known a CUAB (who played a large role in planning this weeks activities, and of which I am a proud member), we'll celebrate with a Gala attended by faculty, alumni and students.  Tomorrow, we'll celebrate the fact that we still have a super awesome football team with our annual homecoming game.

The Biggest Night in Country Music

Live blogs are a lot of fun, and since I haven't done one yet on this blog, what better reason to than for the 45th Country Music Awards?  It'll probably be a random jumble of thoughts... anyhow, hope you enjoy!

First off... Single of the Year goes to The Band Perry and "If I Die Young".  This was tough choice for me... some of the other options were Colder Weather, Don't You Wanna Stay and Honey Bee... I love IFDY though, so I'm happy for them! And wow, Miranda Lambert is giving a cool performance!  Loving the flames (fake or real?) shooying up in the background.  Very cool.

And now SONG OF THE YEAR!  Hmm... gosh, I don't really know who I want to win this either... Band Perry already one one... Taylor Swift and Mean was a good one... and Colder Weather is up again too... and  it's If I Die Young!  That is really exciting for them... I mean, being a new music group and winning the first two awards of the CMA.  That is pretty cool stuff. Also, I love how they are sibling group, it's so cute.

Oh my GOSH!  It's Rascal Flatts and Natasha Beddingfield or whatever her last name is... singing Easy! I just LOVE this song... I don't know what it is about it... the musicality of it is awesome, and their voices work so well together.  Honestly, I think it's Rascal Flatts' best song to date.  It's got so much emotion and power behind it.

EEPS!!! Snow White and Prince Charming from "Once Upon a Time" are presenting Vocal Duo of the year... and it's going to Sugarland!  Haha, yes... I love those two.  Both Snow and Prince, and Sugarland. They are all fantastically awesome.  This is a really cool show. And now Thompson Squared is singing "Are You Gonna Kiss Me or Not".  SUCH a cute song, and they're married.  How much better does it get?

Ooh, and it sounds like Taylor Swift is singing a new song, I'm guessing it's called "This Love is Ours", just based on the refrain.  Another love song from her of course, but it's a cute song... basically life is hard, and people are judgmental and it doesn't matter what other people think about a relationship, because "this love is ours".  She has on a cute pink sweater... sorry, that was a bit ADD, haha.  And Miss Piggy just showed up and slapped Brad Paisley.  That was honestly pretty awesome.

Now going on to Album of the Year... Blake Shelton, Jason Aldean, Taylor Swift, BRAD PAISLEY! (Voted for him!), Zac Brown Band... And it's Jason Aldean.  Well, congrats to you buddy!  (Wish it had been Brad though...) ha... okay... and there's an old guy dressed up as Justin Bieber (apparently he's aged a lot recently) and Carrie and Brad are teasing him about the whole "baby" thing.
Brad: What's the name of your new song again?
"Justin": It's called "It's not my baby, Baby."

Oh wow... okay, this has nothing to do with the CMA, preview for the next Alvin and the Chipmunks movie... chipmunks singing Lady Gaga's "Bad Romance".  Sorry... but I think the Chipmunks totally beat out Gaga as far as coolness goes.

This is pretty awesome... some Nashville students are singing a little bit of "If I Die Young" and playing with Brad Paisley, and he's promoting "Keep the Music Playing", the music education program in schools that the CMA donates a lot of money too.  I love that they are dedicated to music education, and realize how important it is that schools have programs.

One thing that's cool about the awards is getting to see everyone's sets and costumes.  Carrie has had some cool, yet interesting, dresses tonight... the white piece she had when the night started out was pretty cool, and the lead singer from The Band Perry has this gorgeous red, sequined, long formal dress.  The set for the song is cool too.. it's like an old west/covered wagon set up.  Miranda's set with the fire that I mentioned earlier was pretty neat as well, as was Taylor's casual living room set up for her song.

And now we have Vocal Group of the year!  Lady Antebellum... Little Big Town... Rascal Flatts... The Band Perry... Zac Brown Band... My vote is Lady A... and the winner is... Lady Antebellum! Woot!  Now for a song from Sugarland, I haven't heard this one before.  Jennifer has a pretty sweet jacket going on there....

This song will totally make my night.  "Remind Me", by Carrie Underwood and Brad Paisley.  Two of my all time favorite country stars... an awesome song... and they're singing it together.  And can I just say I love Carrie's dress for this... it's so long and full, and flowy and a really cool fabric and - well, other than the slit in the side all the way up her leg - it's a really lovely dress.

Now, time for the New Artist of the Year... Luke Bryant, Band Perry, Thompson Squared and Chris Young. I vote Band Perry.... and it's.... The Band Perry! Those folks are doing really great tonight. =) Now it's Scotty McCreery!  That kid seriously has an amazing voice for someone his age.  And he sounds so much like Josh Turner... it's great.

Male Vocalist of the Year... Jason Aldean, Kenny Chesney, Brad Paisley, Blake Shelton, Keith Urban... HOW TO CHOOSE??? Um... Blake! And he won!  I've really come to like Blake, his song "God Gave Me You" is just beautiful, "Honey Bee" is super sweet and wonderful too.  I'm also super happy that he and Miranda Lambert got married, they are such a cute couple, and I hope they last. I've gotten to see him in concert too, so that's another point to his awesomeness.

Tonight also welcomes back Faith Hill!  She hasn't performed on the CMA's in 5 years, and now she's singing her first single release in quite a while.  It's a really sweet song called "Come Home".  Congrats to Faith on her new song, it's beautiful.

And then... after the commercial break... it'll be time for Entertainer of the Year award!  It's Jason Aldean vs Brad Paisley vs Taylor Swift vs Blake Shelton vs Keith Urban.  This is a tough choice... hmm well... I think it's competition between Brad, Blake and Keith, I'm voting for Brad Paisley.  He has great songs and gives amazing concerts.  We'll have to see once the commercials end....

They are back! And... what the heck is Carrie wearing?  Wow... green greek goddess like dress with... basically no front.  Reba has a super cute dark green formal on though - and now she's about to announce who won... Taylor Swift!  Haha, you go girl!  Aww, she looks so happy and surprised, and I love her dress.  This is so cute... she's thanking all the people who have sang with her at various concerts and she wrote the list on her arm so she wouldn't forget.  I'm glad she one, she's such a sweet girl and super famous but very down to earth about it.

Well... that's it for this year!  I had fun and if you got a chance to watch the awards, I hope you did too! Until the next time.
Recorded by Amanda at 9:59 PM 2 comments: