The thought of having to get up earlier than normal, particularly on a Saturday like today when I was out late the night before and wanted to sleep in, usually causes me to grumble a little bit.  But then I wake up and get out of bed, and suddenly it's not so bad.

The house is very still and very quiet - not a usual occurrence with nine people all living together.   I'm the only one awake as I get dressed for the day and come out to make myself a cup of coffee and eat my breakfast which today is an oatmeal bake cooked in the microwave in a coffee mug which, along with vanilla yogurt, isn't half bad. It's peaceful enough to make me want to get up an hour before everyone else every day....

It's been a few months since I was first bitten by the Pinterest bug, and while I may not be as obsessively pinning and re-pinning as I was those first few days, the attraction has not faded away.

When I first heard of Pinterest, my thought was "Oh, it's another Tumblr blogging type thing".  But, my dear readers, another Tumblr blogging type thing it is not!  I personally am of the opinion that Pinterest is way cooler than Tumblr because
1) Tumblr, at least for me, is really only fun if you have followers and I didn't have any.  Pinterest, followers don't matter as much because...
2) Tumblr is only pictures and text but Pinterest is LINKS.  Cool pictures no matter what way you scroll, but those pictures are links!  Links to the website where you can buy that gorgeous dress or those cool shoes.  Links to how to resize shirts that are too baggy.  Links to tips on how to decorate your house so it looks like that lovely set up in the picture.  Links to 25 do-it-at-home science experiments for your brother.  Links to how to replicate that beautiful hairstyle.  Links on how to make those to-die for Butterfinger Blondies....

I also personally find it a lot easier to randomly browse through stuff on Pinterest than on Tumblr.  Click a category and go through endless scrolling!  Click on a name and peer through the boards that interest you.  I always end up finding some neat recipe, DIY or other cool tidbit of information.

I'm sure Tumblr does have it's own appeal and cool things that Pinterest doesn't have, but I'll leave that for someone else to share with me because after three months of no followers and maybe 5 reblogs I've lost interest.

Haha, and this post started because I had time to kill before leaving for work so I was on Pinterest.  And now that time is sufficiently dead, so farewell!
Recorded by Amanda at 7:48 AM 1 comment:

Today I found myself in need of a profile picture to accompany my bio on the "About Us" page for the Your Little Princess Costume Design website.  I wanted to do something with a costume, but I didn't have anything recent, so I headed downstairs to the closet where we keep the handful of dresses we've either bought at thrift stores or sewn.

While running over our inventory in my mind, I couldn't remember anything that I had actually made other then a skirt I didn't have a blouse for anymore.   However, when I got down there I discovered and remembered the first costume and major sewing project. 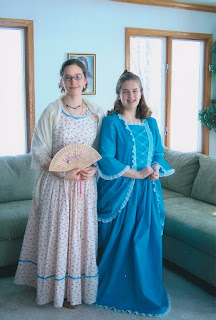 I made this waaaaay back in 2007 and wore it a handful of times to our homeschool group Daddy-Daughter Ball, a few Girls Club tea parties, perhaps another party, and lent it out a few times to siblings and friends. I also slipped a hugely poofy slip under it one year and wore it to a Civil War reenactment. 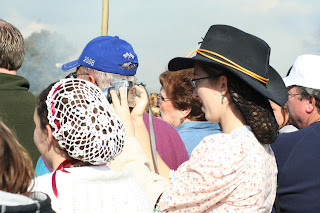 I did pull it out once for a photoshoot for potential Ink and Fairydust covers and it made it onto the cover of the July 2010 issue.  And then I forgot about it, until I went downstairs today to find something for the profile picture. 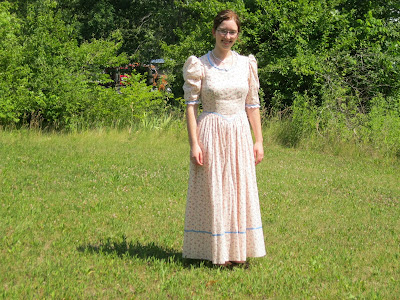 I was a bit surprised that it fit... and actually, it fits really well.  Much better then it looks like it fit in the previous pictures of me wearing it....   I'm going to have to find an excuse to wear this again sometime soon. It really is a cute dress. 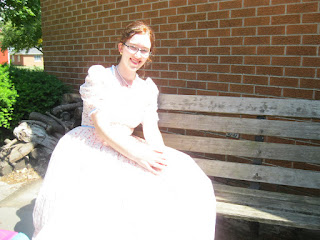 I ended up glowing in this picture!  A bit random.