Today I went to the library and finally found a copy of "The Young Victoria".  I'd been looking for it every time I went to the library for several months, but it was always checked out and for some reason I never ordered it online.  I finally was able to borrow it today, and even though I can only have it for three days, and had to pay a dollar since it is a "hot" video, it was worth it.  It was so worth it.

Before I go further, a note to any parents or careful older siblings: there are some marriage scenes, but anything is implied, rather than explicit. All are clothed and on the whole, they are very tastefully and beautifully done.  I personally would have no problem with my younger siblings viewing this film with me.  As far as swearing, there was only one word in the entire film.

The characters are very well cast, featuring Emily Blunt, whom I have not seen before, as Victoria, Rupert Friend, whom I have seen as Mr. Wikham in "Pride and Prejudice" (2005) as Prince Albert.  There was also appearances by Miranda Richardson (Madame Giry, "The Phantom of the Opera"), Jim Broadbent (Professor Kirke, "The Lion, The Witch and the Wardrobe") and Harriet Walter (Fanny Dashwood, "Sense and Sensibility" and - Yavi, you'll like this - Mrs. Gowan, "Little Dorrit.")  The costumes were absolutely beautiful... and the musical score was just gorgeous.


And of course, the story.  A lovely young woman, a terribly handsome young man, a wonderful romance, a happy marriage - and best of all, it's real.
Recorded by Amanda at 9:51 PM 7 comments:

Help The Shadow of the Bear!

Many of you, my dear readers are fans of Regina Doman's books and are all awaiting the release of the film, very eagerly.  Here now, is your chance to help the film come to life on our screens!

Elena and co. are in need of $400 to purchase the proper editing software and so several fans have started an online fundraiser!  The funds are being raised through an online store, featuring homemade jewlery, scarfs, and other goodies.  All the proceeds go towards the $400 goal!  The products are all quite lovely, as well as affordable, so I encourage you all - even those of you who have not read Regina's books - to go and check it out!  (And buy something, of course.  ;) )

The Shadow of the Bear Artfire Store
Recorded by Amanda at 3:12 PM No comments:

Today is my Eleventy-First Birthday! 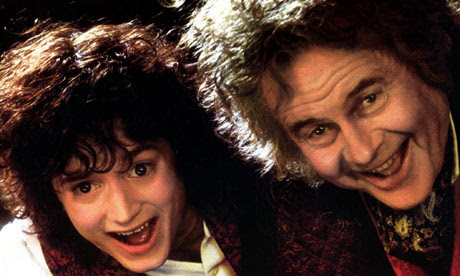 All the one hundred and forty-four guests expected a pleasant feast; though they rather dreaded the after-dinner speech of their host.... He was liable to drag in bits of what he called poetry; and sometimes, after a glass or two, would allude to the absurd adventures of his mysterious journey....

After the feast... came the Speech. Most of the company were, however, now in a tolerant mood, at that delightful stage which they called 'filling up the corners'....

My dear People, began Bilbo.... Bilbo left his place and went and stood on a chair under the illuminated tree. The light of the lanterns fell on his beaming face.... They could all see him standing, waving one hand in the air, the other was in his trouser-pocket.

Proudfoots, repeated Bilbo. Also my good Sackville-Bagginses that I welcome back at last to Bag End. Today is my one hundred and eleventh birthday: I am eleventy-one today! 'Hurray! Hurray! Many Happy Returns!' they shouted.... This was the sort of stuff they liked: short and obvious.

I hope you are all enjoying yourselves as much as I am. Deafening cheers.... Cries of Yes (and No). Noises of trumpets and horns.... Indeed, in one corner some of the young Tooks and Brandybucks, supposing Uncle Bilbo to have finished (since he had plainly said all that was necessary), now... began a merry dance-tune. Master Everard Took and Miss Melilot Brandybuck got on a table and with bells in their hands began to dance the Springle-ring: a pretty dance, but rather vigorous.

But Bilbo had not finished. Seizing a horn from a youngster near by, he blew three loud hoots.... I shall not keep you long, he cried. Cheers from all the assembly. I have called you all together for a Purpose..... There was almost silence....

Indeed, for Three Purposes! First of all, to tell you that I am immensely fond of you all, and that eleventy-one years is too short a time to live among such excellent and admirable hobbits. Tremendous outburst of approval.

Secondly, to celebrate my birthday. Cheers again. I should say: OUR birthday. For it is, of course, also the birthday of my heir and nephew, Frodo. He comes of age and into his inheritance today. Some perfunctory clapping by the elders.... Together we score one hundred and forty-four. Your numbers were chosen to fit this remarkable total: One Gross, if I may use the expression. No cheers.... Many of his guests, and especially the Sackville-Bagginses, were insulted, feeling sure they had only been asked to fill up the required number....

It is also, if I may be allowed to refer to ancient history, the anniversary of my arrival by barrel at Esgaroth on the Long Lake; though the fact that it was my birthday slipped my memory on that occasion. I was only fifty-one then, and birthdays did not seem so important. The banquet was very splendid, however, though I had a bad cold at the time, I remember, and could only say 'thag you very buch'. I now repeat it more correctly: Thank you very much for coming to my little party. Obstinate silence.... Why couldn't he stop talking and let them drink his health? But Bilbo... paused for a moment.

Thirdly and finally, he said, I wish to make an ANNOUNCEMENT. He spoke this last word so loudly and suddenly that everyone sat up who still could. I regret to announce that — though, as I said, eleventy-one years is far too short a time to spend among you — this is the END. I am going. I am leaving NOW. GOOD-BYE!

The Fellowship of the Ring, LoTR Book 1, Ch 1, A Long-expected Party
h/t http://www.henneth-annun.net/resources/events_view.cfm?evid=1279
Recorded by Amanda at 10:46 AM 2 comments:

Email ThisBlogThis!Share to TwitterShare to FacebookShare to Pinterest
Labels: Lord of the Rings

Award and Update on Life

Bernadette from Maria's Lilies gave me this lovely blog award today!  I haven't gotten one of these in a while, so thank you!


1. Accept the award. Post it on your blog with the name of the person who has granted the award and his or her blog link.

2. Send it to 15 other bloggers that you have newly discovered.

3. Contact those blog owners and let them know they've been chosen.


I'm afraid I haven't been reading very many blogs lately, so I think what I'll do instead is give this award to any one who has newly discovered my blog!  In return, I ask that you post a comment with a link to your blog so that I can read it.  =)


You've probably noticed that I haven't been to frequent on here, and you can blame college for that!  Getting ready and starting has taken up most of my recent time and attention, but I promise I won't forget this old place entirely!  I'm loving school, the people, the classes and the campus.  Everyone is so friendly, my English/History class is AMAZING and the campus is just so beautiful.  Also, I just tried out last night for the Phantom of the Opera!  I didn't get a call back for any of the main characters, but there's still a chance for the chorus, which I would just love to be in.  Cast list will be posted tomorrow and I'll let you know yay or nay then!
Recorded by Amanda at 1:33 PM 3 comments: