A very happy New Year to you all!  Normally I would do a year in review post, but since I am currently out visiting my Knight, I'll save that until I'm back at home.  Until then, have a blessed day and year and may it be full of the love and joy of the Lord.
Recorded by Amanda at 11:42 PM No comments: 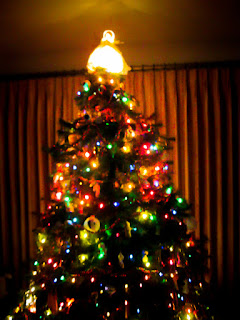 As I write this, the first snowstorm of the year - in fact, the first snow at all - is fast approaching.  This morning started out at a warm 50 degrees and rain, but the temperature is steadily falling as the snow approaches.  After a month of up and down temperatures, grass that is still growing, and many days in which coats were unnecessary, it really is starting to look a lot like Christmas.

It is finally beginning to feel like Christmas as well.  I do think the lack of that special, Decemberish, Christmasy chill in the air has had a lot to do with the fact that I have been forgetting that Christmas is coming.  I have been struggling to get in the spirit of it... been missing that excitement and joy that I have had every year in years past... been missing the desire to prepare gifts or listen to Christmas music.  It is depressing to say the least.  When we set up all our decorations... well, it was probably the most lifeless decorating session we have ever done.

Yet in the last day or it has begun to feel a little more like Christmas.  The Christmas decorations around the house are no doubt helping me to get in the spirit, as well as the realization of it's closeness.  I am getting more excited, slowly but surely.  I am not fully there yet, but it's coming.

It's beginning to look a lot like Christmas.
Recorded by Amanda at 5:43 PM No comments:

Well, since that title pretty much sums up my thoughts - do I really have to write the rest of this post?  Very well, I shall.  If you have not seen this movie, do not be afraid to continue reading.  I want to keep this spoiler free out of respect for anyone who may be waiting to see it  until it comes out on DVD, or have not been able to make it to the movie theaters.

An Unexpected Journey was, in a word, beautiful.  The acting, the score, the cinematography was all very well done in my opinion.  They never made a better casting decision than when they chose Martin Freeman as Bilbo.  He becomes our dear hobbit in every way. At no point during the film did I think of Martin Freeman the actor, or John Watson from Sherlock (the only other role I've ever seen Freeman in).  No, he was Bilbo Baggins to a T, and very believably a younger version of the Bilbo in The Lord of the Rings.  The rest of the cast was stellar as well, I have no complaints with any of them.

The music... the music was breathtaking.  There were hints and echos of The Lord of the Rings, but only just enough to connect the two.  The score of The Hobbit was decidedly it's own, and full of new and wonderful themes.  My favorite is The Misty Mountains theme.  I loved that song in the book, I came up with my own melody for it, and I was so excited to hear Howard Shores vision for it, and to hear it incorporated into the rest of the soundtrack.

And the most important part.... the story.  I've heard that some reviewers are saying that the film was too bloated and drawn out and Jackson shouldn't and didn't need to make it into three movies.  I disagree with that.  The filmmakers aren't just telling you the story of The Hobbit, they are continuing to tell us the story of Middle Earth.  At no point did I feel that Jackson was dragging anything out and putting in fluffy filler.  It was the story of The Hobbit, and it was everything that went on in the background that we didn't get to see on the pages of the book.  For a film, it stayed wonderfully close to the book and many of my favorite lines were written in, nearly word for word.

In conclusion, I am very, very happy with how The Hobbit: An Unexpected Journey turned out.  It was all that I had hoped it to be, and I have a feeling I'll be returning to the theaters at least one more time, if not more...
Recorded by Amanda at 4:42 PM 1 comment:

Email ThisBlogThis!Share to TwitterShare to FacebookShare to Pinterest
Labels: reviews

Happy Feast of Saint Nicholas!  One of the many traditions of Christmas is associated with this saints feast day... leaving your shoes out the night before and finding little goodies in them the next morning!  Does your family participate in this celebration?  What did Saint Nicholas surprise you with this morning?  As old as I am ;-) this is something I still look forward to every year... this year he brought me my favorite candy bar and a ticket to go see The Hobbit on the 15th (since, sadly, we won't be able to make it on the 14th.  But on the 15th we're going to the first showing of the day!)
Recorded by Amanda at 12:33 PM 2 comments:

I scroll through my blog roll and I read so many wonderfully worded and beautifully thought out posts by my favorite bloggers... posts about various topics, and posts about everything and nothing.  I get the urge to write such a post myself, and somehow it never works out.  Most of the time the words and thoughts won't come and so I give up.  Maybe I'm trying too hard to be too profound.  Maybe the trick is to not try and to just write.

I go in and out of phases of listening to music frequently, and I am currently coming out of a not listening phase and into a listening phase again... particularly with country music.  It probably has something to do with a handful of songs that have come onto the radio that have really captured my heart.  You know those kinds of songs.  They start playing, and your face lights up with a smile and you hum along until you've learned all the words and can sing along.

I am not sure what it is about these three songs that made me fall in love with them.  Each has a different theme... one is fun and upbeat, wild and spontaneous and asking a girl to go out with him, because he has a little bit of beer money... one is heartfelt and hopeful, honestly wondering how a girl could love a hard to love guy... one is reassuring and uplifting as it reassures that every storm runs out of rain.  Perhaps it is the instrumentals, perhaps it is the lyrics, perhaps it is the deep country voices of the men singing.  Whatever it is about them, it keeps me turning on the radio in the hopes one will come on.  Yes, I have each on my ITunes, but there is something exciting about waiting anticipation for "your song" to start playing.  A lighthearted kind of joy.

Usually in December my music turns towards the Christmas vein of things, however this year the first few days of December have been above 50 degrees, and Christmas just isn't in the air.  I suppose that this is what the season must feel like in the southern states.  Illinois, however, is not a southern state, and I want my biting winds, snow flurries and chilling cold.  In January or February such things are not as welcome, but in December they are thrilling.  Scarves, sweaters and hot chocolate don't have the same appeal when it feels like it should be Easter right around the corner...

The countdown in the upper right hand corner of my web browser says there are 23 days left.  23 days until I wake up at four in the morning and drag my suitcase out to the car.  23 days until my dad drops me off at the airport and I make my way through security to my terminal.  23 days until the plane takes off from Illinois and lands on the East Coast.  23 days until I walk out of that airport and see my Knight pull up to the curb to get me.  23 days until we are together again, for a glorious nine days.  Twenty three days, 270 hours, 16,200 minutes.
Recorded by Amanda at 3:41 PM 3 comments:

The Piano Guys Do it Again...

Behold, a beautiful new piece from the amazing Piano Guys, for your Advent listening pleasure!
Recorded by Amanda at 1:08 PM No comments: