I have been forgetting that it is only May; with all the 70 and 80 degree weather it feels like we skipped right over spring and have rushed headlong into summer.  Which is alright, I think, because I have been loving the warm weather, but I also love the 60s and low 70s of spring as well.  I am a little sad to have missed out on that this year.  Regardless of the actual temperature outside - it is finally warm out!  Hurrah for no more winter!

The change of the season means that it is time to change over my wardrobe, which means a visit to the thrift store.  Sister 1 and I ventured out to Goodwill the other morning, and both returned each with a large bag of success.  My spoils included three pairs of capri's, a dress and six new shirts all for the delightful price of only $36.  They are all washed and now begins the fun part of debuting each new item over the coming days and weeks!

Yesterday I went to the library before I headed off to work in the afternoon.  I am not entirely sure why, but I absolutely love going to the library in the summer and coming out with a huge pile of books.  I'm thinking part of the reason may be the sensation of getting out of your car, walking through the hot parking lot with the sun beating down and the sounds of the world all around you and then entering the doors into a place of quiet coolness where the only people you encounter and the only drama you live out is inside the cover of the novel on the shelf.  Then taking your tall stack books to the counter where the kind librarian smiles and says "My, you certainly have a lot of summer reading ahead of you!" and feeling a bit like Belle.  And then, returning home and sitting out under a shady tree to get lost in the pages of an intriguing new story.

So today, I think I will don one of of my shiny new thrifted outfits, select another book since I already finished the one I started yesterday, and enjoy the coming of summer.
Recorded by Amanda at 7:35 AM 2 comments:

I seem to have been proven wrong in my theory that I can drink caffeine at any time of the day, and it will have no effect on my ability to sleep.  I had a medium caramel iced coffee at 7 and finished drinking it close to 9... thus it came to pass that I found myself lying wide awake in my bed with thoughts running around in my head and my sister snoring loud enough to wake the dead.  I decided the best course of action would be to attempt to share my thoughts in a semi coherent state, rather than make futile attempts at slumber at this point in time.

In between work and choir practice today, I read two very interesting articles on the blog "Bad Catholic" both of which can be read by clicking HERE and HERE.  Both shared some very interesting thoughts on what chastity and purity are, and are not, and how modern culture has warped those two terms into views that I think a lot of people partake in. (Yes, including people who are striving for chastity and purity.)  Let me share a quote that sums up what really struck me.


Through the Church we begin to hear the crackle of the fire drown the echo of the empty room. Chastity is the successful integration of sexuality within the person which expresses our belonging to the body, involving the whole person. It is not just not having sex before marriage. The chaste person is simply the person living his or her sexuality authentically, as the self he or she truly is. To be chaste is to be precisely who you are, to freely choose sexual authenticity as part of your entire, infinitely valuable, person.
Any other definition of chastity is centered around an absence, and as such has no soul. “Chastity is not having sex before marriage.” “Chastity is not showing too much skin.” These things may be fruits of being chaste, but there is no way in hell that they are chastity in itself.  (Is Female Purity BS?)

Slight caveat here... I know men are called to chastity and purity as well, but for the time being, I'm a woman and I can best speak from that point of view, so my thoughts are going to be a tailored more to my gender.

One of the notable elements about a woman's body is that she was created with curves.  Curves that have sadly become exploited by society, but we were created that way none the less.  A false chastity, looks at that fact and tries to hide it.  It reacts with shame and seeks to repress the way God created women by covering it up so that no one, no one can tell that it is there.

God created the woman's body to be feminine, to be comforting, to be nurturing.  To attempt to repress and hide all outward signs of that is to repress and hide God's design.  True chastity embraces God's creation.  Of course, this doesn't mean we take it to the opposite extreme and bare all to the world.  True chastity acknowledges the beauty of the human body, it says "yes, this is the way God made me, and I will not hide it.  I will treat it with dignity and respect, but I will not refuse to acknowledge it."

One of my favorite quotes goes "Your dresses should be tight enough to show you're a woman and loose enough to show you're a lady."  (I've seen this attributed to both Marilyn Monroe and Edith Head... I am not sure who said it first.)  I have found that to be a very wise statement.  Being chaste in our dress and mannerisms doesn't mean that we have to deny the fact that we are women, but by the same token we should still conduct ourselves in a way that is elegant and dignified.

Obviously, a person's body is not the whole sum of their worth and value and that is the last thing that I am trying to say here.  If I am saying more about the body than chastity of mind and attitude, it's because that's what I was thinking of while I was trying to fall asleep.  Deal with it.  I could go on and on about every aspect of purity in the human person, but I won't.

If God meant for us to repress our male and female natures behind the garb of false chastity, I truly believe that He would not have made us that way.  God made us beautiful and wonderful.  Chastity doesn't mean to not do, it means to do.


Chastity, the Church says, “is a long and exacting work. One can never consider it acquired once and for all. It presupposes a renewed effort at all stages of life.” Chastity is something you do every day, as being yourself is something you do — with immense difficulty — every day. It’s reward is authenticity (Is Female Purity BS?) 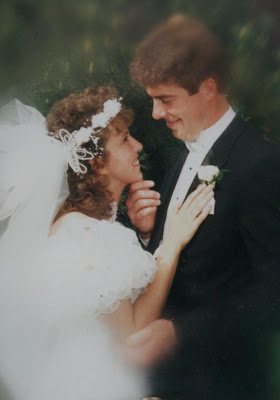 My parents were married and our family began.  Happy Anniversary Mom and Dad!  I love you <3
Recorded by Amanda at 10:23 PM 1 comment:

Email ThisBlogThis!Share to TwitterShare to FacebookShare to Pinterest
Labels: family

Necessity is the Mother of Invention

It's entertaining the things you can come up with when you have to.  A few months ago the metal prop for the music stand on our baby grand broke.  We didn't have the talent or supplies needed to fix it, so I came up with the next logical solution... prop it up with one of our many dictionaries.

Today I found myself in need of another creative solution.  I went searching for some new sheet music to play and came across a wonderful handful of new pieces from Sebastian Wolff.  I gleefully downloaded them and went to hit print - and then remembered that our printer broke this morning.

I really, really wanted to try out my new songs... then I hit upon a brilliant idea.  Remove the dictionary and lay the music stand back flat and just play off of the PDF's on my laptop.  Other than the fact that scrolling takes a few seconds longer than a pager turn, it worked out fairly well.  Enough to satisfy my piano playing urges for the time being. 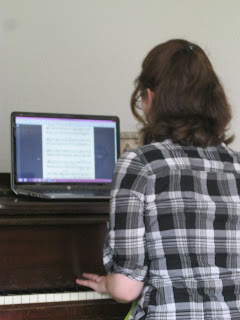 I am looking forward to having them printed out though....  Oh well.  In the meantime I'll work on alphabetizing my miscellaneous sheet music binder.  It's currently in purchasing/downloading order rather than alphabetical which means if I want to find a piece I have to try and remember when I printed it out.  Not always the best method of organization.
Recorded by Amanda at 5:32 PM No comments: